A 12-year-old Dundee boy has achieved the highest possible score in a Mensa test, making him smarter than Albert Einstein and Stephen Hawking. 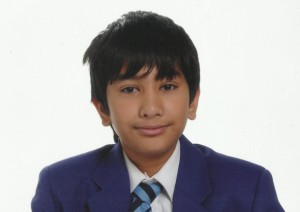 Agnijo Banerjee scored 162 in the test – higher than the 160 IQs recorded for the famous scientists.

The first-year pupil at Grove Academy, Broughty Ferry, has already got an A pass in Standard Grade maths and hopes to get his maths Higher in May, four years ahead of schedule.

His proud mother, Pronita, 44, said he showed extraordinary intelligence from an early age.

“He is an extremely gifted maths student who has won three top gold awards in the Scottish Mathematical Challenge in three successive years,” she said.

“He also performed extremely well when he took his standard grade exam while still in primary seven, almost four years before his peer group, getting an A pass.

“We knew from an early age he was very bright, but until he did the Mensa test we didn’t really know how intelligent he was.”

Agnijo got his Standard grade A while at Forthill Primary School, Broughty Ferry, last year.

The schoolboy was born in India and moved to Scotland when he was a baby.

The family first lived in Glasgow then in Dundee, where Agnijo’s father, Dr Subhayu Bandyopadhyay, worked at Ninewells Hospital – Dr Bandyopadhyay is now a consultant in obstetrics in Aberdeen

Mensa, the world’s largest and oldest society for people with high IQs, said Agnijo’s 162 on the Cattell IIIB IQ test placed him in the top one per cent of the population and is the highest score for his age group on that IQ test.”

The latest issue of The Saltire