Daniel Smith has his name in the record books, despite the fact he is only nine years old.

In February, he became the youngest person to climb all 282 Munros (a Munro is a Scottish mountain with a height over 914.4m).

He has shared his feat with his father and climbing partner, Mark. 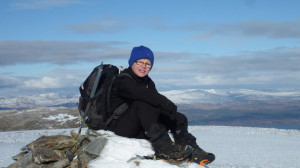 bug when he was three and began walking in the Campsies, near his Glasgow home.

He climbed his first Munro when he was six and his final climb was Meall Buidhe, on the Knoydart peninsula.

“We’ve had some real adventures and met some amazing people, plus I get to spend time with my dad,” Daniel said.

“I just think about getting to the top and how my dad is doing in front of me.”

Many people have climbed all the Munros, of which the highest is Ben Nevis at 1344 metres.