Historic castle to be restored to former glory

A castle on the Isles of Lewis is to be restored to its former glory and turned into a museum.

Lews Castle, on the edge of Stornoway, has been on the buildings at risk register since 2000 and its developme 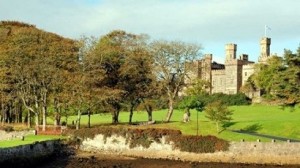 nt has been stalled because of a lack of funding.

Now the council which owns the building, Comhairle nan Eilean Siar, has submitted planning permission and listed building consent for external repairs to the castle.

The council hopes to turn it into a museum and archive, with the possibility of using it for hospitality.

The castle was built in 1857 as a country house for Sir James Matheson, who had bought the entire island, and in 1923 it was gifted to the people of Stornoway.

Since then it has served as a naval base during the Second World War, a college and council offices, but has been uninhabited since the late 90s.

Scots can cash in on £375bn oil bonanza