New census figures show Scotland’s islands are enjoying a population boom, as people are attracted by the lifestyles and work in the new green-energy industry.

The increase over the past decade is highest on Orkney, Shetland and the Western Isles, which have been said to be the happiest places to live in the UK. 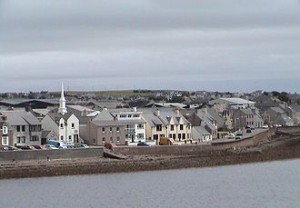 Stornoway, on the Isle of Lewis

In total, 50 islands saw an increase, with the largest rise in Orkney, which grew by 11 per cent (2104) accounting for more than half of the increase across all the Scottish islands.

Residents in the islands were found to be the happiest, most satisfied and least anxious in the UK in the first annual results of the so-called happiness index, which was released by the Office for National Statistics last year.

Participants were asked how worthwhile they found their activities, their level of life satisfaction, how happy and how anxious they were.

The Western Isles, Orkney and Shetland scored the best in each category.

When asked how worthwhile their lives were, residents scored an average of 8.2 out of ten.

When asked how happy they were, the average was eight out of ten and life satisfaction showed an average of 8.1.